The Witcher III: Wild Hunt is a large game in several ways. Before its announcement during Nintendo's E3 2019 Direct, many doubted its huge world could be squeezed onto Switch's mobile chipset, but it seems that Saber Interactive has (hopefully) found a way.

Beyond the technical aspects of getting the game running on Switch, the filesize of the game was also a worry for gamers hoping to avoid filling up their micro SD with just one game. The Switch is getting the Complete Edition, including every last drop of DLC and content the game has ever received, and all those assets add up.

The game's Twitter channel confirmed that the Switch port is approximately 32GB in size and CD Projekt has also confirmed that it's shelling out for the 32GB game card, meaning the entirety of Witcher III will come on the cart. We've seen some questionable practices from companies unwilling to swallow the manufacturing costs and sending out physical versions that also require a hefty download (we're looking at you Capcom), or simply producing a box with a code inside, so it's to CD Projekt's credit that every part of this huge game will come on the cartridge.

Also included in the boxed version, however, are some other goodies. It seems the physical cart will come with a compendium catching Switch gamers up on the intricacies of the Witcher Universe, plus a map and stickers: 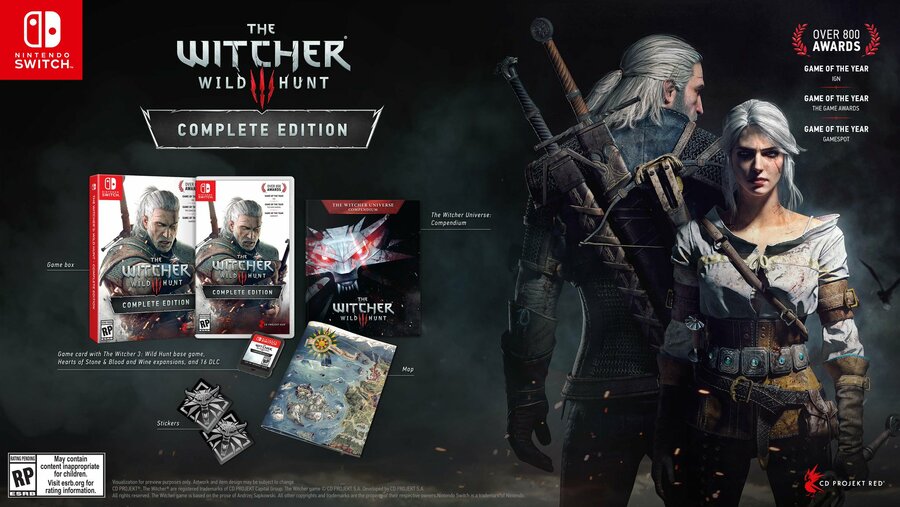