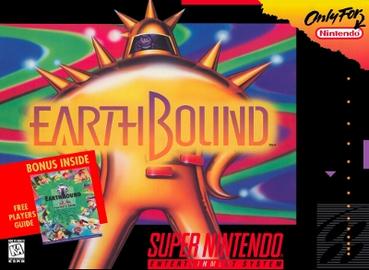 
EarthBound, also known as Mother 2 in Japan, is a 1994 Japanese role-playing video game co-developed by Ape Inc. and HAL Laboratory and published by Nintendo for the Super Nintendo Entertainment Systemvideo game console. As Ness and his party of four, the player travels the world to collect the 8 melodies in order to defeat the evil alien force Giygas. It is the second game of the Mother series and the first and only to be released outside of Japan for two decades. EarthBound was released in Japan in August 1994, and in North America the next June.

EarthBound features many traditional role-playing game elements: the player controls a party of characters who travel through the game's two-dimensional world composed of villages, cities, caves, and dungeons. Along the way, the player fights battles against enemies and the party receives experience points for victories.[4] If enough experience points are acquired, a character's level will increase. This pseudo-randomly increases the character's attributes, such as offense, defense, and the maximum hit points (HP) and psychic points (PP) of each character. Rather than using an overworld map screen like most console RPGs of its era, the world is entirely seamless, with no differentiation between towns and the outside world.Another non-traditional element is the perspective used for the world. The game uses oblique projection, while most 2D RPGs use a "top down" view on a grid or an isometric perspective.

Unlike its predecessor, EarthBound does not use random encounters. When physical contact occurs between a character and an enemy, the screen dissolves into battle mode. In combat, characters and enemies possess a certain amount of HP. Blows to an enemy reduce the amount of HP. Once an enemy's HP reach zero, that enemy is defeated. If a specific type of enemy is defeated, there is a chance that the character will receive an item after the battle. In battle, the player is allowed to choose specific actions for their characters. These actions can include attacking, healing, spying (reveals enemy weakness/strengths), mirroring (emulate a specific enemy), and running away. Characters can also use special PSI attacks that require PP. Once each character is assigned a command, the characters and enemies perform their actions in a set order, determined by character speed. Whenever a character receives damage, the HP box gradually "rolls" down, similar to an odometer. This allows players an opportunity to heal the character or win the battle before the counter hits zero, after which the character is knocked unconscious.If all characters are rendered unconscious, the game transitions to an endgame screen, asking if the player wants to continue. An affirmative response brings Ness, conscious, back to the last telephone he saved from, with half the money on his person at the time of his defeat, and with other party members showing as still unconscious. Because battles are not random, tactical advantages can be gained. If the player physically contacts an enemy from behind (indicated by a translucent green swirl which fills the screen), the player is given a first-strike priority. However, this also applies to enemies, who can also engage the party from behind (in this case, the swirl is red). Neutral priority is indicated by a blue swirl. Additionally, as Ness and his friends become stronger, battles with weaker enemies are eventually won automatically, forgoing the battle sequence, and weaker monsters will begin to flee from Ness and his friends rather than chase them.
Currency is indirectly received from Ness' father, who can also save the game's progress. Each time the party wins a battle, Ness' father deposits money in an account that can be withdrawn at ATMs. In towns, players can visit various stores where weapons, armor, and items can be bought. Weapons and armor can be equipped to increase character strength and defense, respectively. In addition, items can be used for a number of purposes, such as healing. Towns also contain several other useful facilities such as hospitals where players can be healed for a fee. 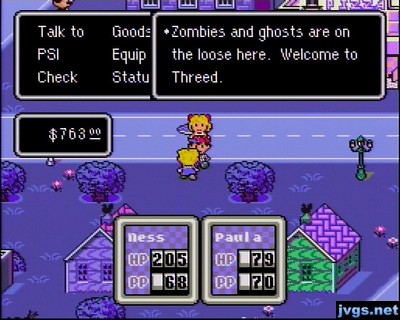 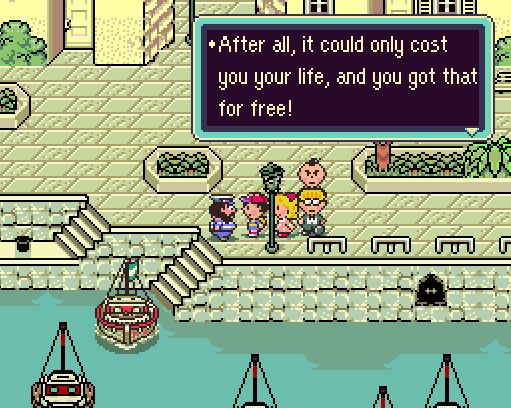