Nintendo files patent for digital card format, possibly has something to do with Pokemon 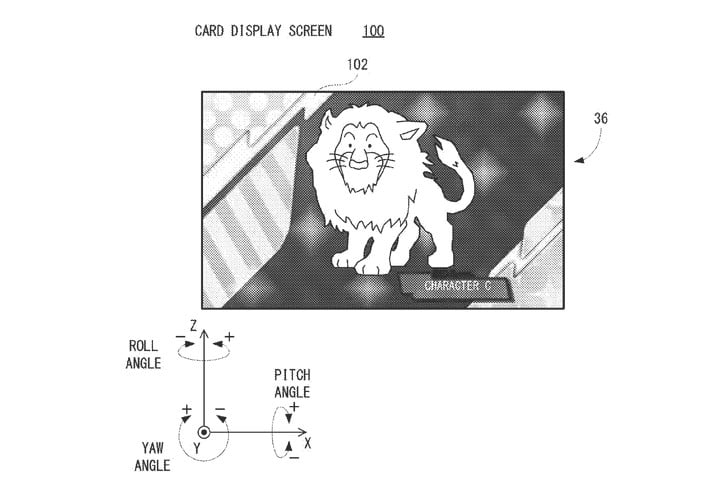 Another interesting Nintendo patent surfaced this week. On Wednesday, the company filed an application for a “non-limiting example game apparatus” involving a “card display screen including an image of a card object” displayed on the apparatus’ screen.

What the patent boils down to is a digital card format, perhaps for something Pokemon-related. Here’s one excerpt from the application:

And a few more details:

– The card shows a a composite made of a background
– Also shows a “color change image” that will differ according to “an attitude of the game apparatus”
– This could point to the image changing when a monster is damaged in battle, reflecting their drop in health in real time
– The application says depending on where the user is positioned in relation to the card, it can appear to “glitter”

Arguably the biggest hint of the patent being Pokemon-related is that the card system can be used to capture “the character of the wild monster by operating the player character and making it a fellow character.”

If the NES Classic and SNES Classic have taught Nintendo anything, it’s that retro sells. And in Japan, Nintendo has filed for three new GameCube trademarks. The best part about this is that these trademarks are specifically video game-centric. Could this be our first hint that Nintendo is planning to release a “GameCube Classic” after the inevitable “Nintendo 64 Classic”?

Nobody would be surprised if this were the case. There is certainly a demographic who would pay to have Luigi’s Mansion, Super Mario Sunshine, Pikmin, and The Legend of Zelda: The Wind Waker all on the same handy device. They better get the emulation on Super Smash Bros. Melee absolutely perfect though, or else its fan base is likely to riot in the streets (or, more likely, some subreddit that Nintendo doesn’t care about).

As we’ve previously reported, Nintendo recently applied for new Donkey Kong trademarks in Japan, but those were all merchandising-centric. This time around, the news is more exciting for Nintendo gamers.

Shuntaro Furukawa Is Now The President Of Nintendo Co., Ltd.

The 78th Annual General Meeting of Shareholders that has been taking place in Kyoko is the last for Nintendo President Tatsumi Kimishima. In fact, today is the day that Kimishima’s presidency was expected to conclude. Shuntaro Furukawa had been confirmed to be his successor for a while now. That said, it has been confirmed that Shuntaro Furukawa is now the 6th president of Nintendo.

Rumor: Former Retro Studios Employee Claims “Half The Team Is Expecting Nintendo To Shut It Down”

It feels like it’s been a while since we heard any substantial news in regard to what Retro Studios is up to. According to a number of current and former employees, however, things aren’t looking too good for Nintendo’s Texas-based division. Several staffers have left extremely negative reviews on Glassdoor, citing factors such as “poor upper-management” and “poor communication.” One employee in particular went so far as to suggest that Nintendo is planning to shut down the studio for good.

But he considers the confirmed lineup as "powerful"

Outgoing Nintendo president Tatsumi Kimishima has just taken part in his final meeting with the company's shareholders, and has revealed that the company hasn't fully disclosed its 2018 software lineup.

Kimishima - who has stepped aside to allow Shuntaro Furukawa into the hot seat - was quizzed about the fact that Nintendo’s E3 showing triggered a decline in share value, with investors apparently concerned that the company lacks the games needed to keep up the Switch sales momentum.

We already know that Pokémon: Let's Go, Pikachu! and Let's Go, Eevee! and Super Smash Bros. Ultimate are on their way before the close of 2018, but it seems even these potential blockbusters can't give investors the confidence they need.

Kimishima stated that Nintendo will reveal more about its full 2018 lineup at the appropriate time, and this includes games that will launch during the competitive holiday season at the year's end.

Even so, Kimishima referred to the already-confirmed lineup as "powerful", and stated that it is one of Nintendo aims to maintain the Switch's sales performance all the way up to the festive season, which triggers a rush of sales in both hardware and software.